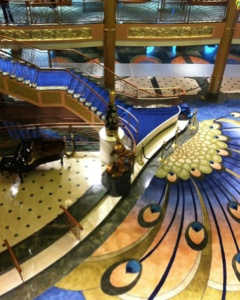 I was among the fortunate few who were invited to tour Disney’s newest ship, the Fantasy, and to attend the ship’s christening in New York City. On February 29 I was able to tour the ship for four hours, and then I attended an evening media event celebrating the christening of the ship on the ship on March 1.

The Fantasy is a huge ship, so that was not, of course, enough time to see everything. Fortunately, I’ve already sailed twice on the Disney Dream, the sister ship of the Fantasy, so I was already familiar with the major features of these two ships. In light of the limited time I had to tour, I decided to focus on the differences between them. No doubt I will have more updates after I actually sail on the Fantasy, which will happen this spring.

The Fantasy’s overall decor is more Art Nouveau vs. the Dream’s Art Deco decor, though both ships use some of each design. There is a peacock design theme carried out on the Fantasy, which brings in rich tones of blue and gold.

Since the two ships are very similar, if you’re planning a cruise on the Disney Fantasy I recommend reading my report on the Disney Dream, as well as the information on the “Planning Advice” and “Onboard Advice” pages. What you’ll find below is a little information about the new features that can be found only on the Fantasy. 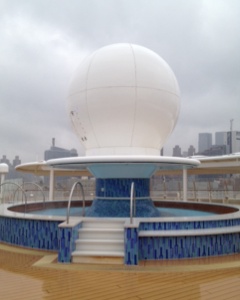 I have heard from readers who have sailed on fully-booked sailings of the Disney Dream that there just isn’t enough pool space on that ship. I personally haven’t experienced this issue, perhaps because the ship was not completely full on either of my Dream cruises. In addition, I felt that the AquaDuck water coaster and the Nemo’s Reef water splash area provided fantastic extra options for water fun on the ship, making the pools somewhat less important.

However, Disney has listened to the criticism and responded with changes to the Fantasy. There are three additional water features on the new ship: Satellite Falls for adults, a splash pool for kids and families, and the Aqua Lab water play area. 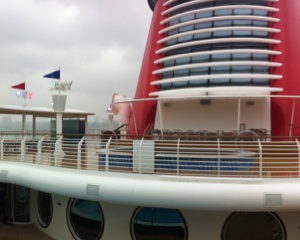 Satellite Falls, located on a new adults-only sun deck on Deck 13 Forward, is basically an oversized fountain with a built-in bench. You can sit on the bench around the base of the column, facing outward, and splash your feet in the water and get wet from the fountain. It should be a nice place to cool off when enjoying the sun deck.

Because it was cold and drizzly in New York City during the preview tour, Satellite Falls was not operating and the photo to the right reflects that.

A shallow, oval splash pool (pictured at left) which I’m told will be for kids and families, has been installed on Deck 12, above Cove Cafe, overlooking the adults-only pool on Deck 11. Apparently this pool was added to the design very recently, since it didn’t even appear on the ship maps we were given.

The placement of this new family pool is controversial: some people are worried that the noise of kids splashing and playing in the pool above will interfere with the intended serenity of the adult pool. There is really no way to know for sure until the ship officially launches and we have an opportunity to see how it all works out.

The Aqua Lab water play area on Deck 12 Aft (pictured at right) looks like it will be a fun addition for families and kids.

Because of the cold, rainy weather in New York City during the preview tour, Aqua Lab was not operating, but it includes all the usual Disney water play area features, with lots of places to get sprayed, splashed and even drenched by a boatload of water!

Due to its location near the Aqua Duck, it will also provide a nice “overflow” area when there are long lines for the water slide.

Thanks to travel agents Jo and Jodie of Small World Vacations for photos of Satellite Falls and Aqua Lab.

Disney has completely revamped the adult “entertainment district” on the Fantasy, with every lounge and night club re-themed to fit the overall concept, which is to take you to great places in Europe, all in one night.

I was able to tour Europa during the day, and the next night I actually experienced an evening there. I was impressed both times. The clubs and bars are beautifully themed, with quirky surprises around every corner. To see a whole page of photos from Europa, click here.

There are five interlinked areas in Europa:

La Piazza, the “hub” of the space, includes a carousel bar, Venetian masks and a classic Vespa with sidecar. It’s a rather odd combination of elements, but somehow it works. It actually reminds me more of New Orleans than Italy, but in any case it’s a fun place to have a drink.

Skyline, which is the only bar that retains the same name as its equivalent on the Dream, features the same huge screens that create “windows” on various city skylines. There are two changes from the Dream: first, the skylines in this bar are all European (Paris, London, Barcelona, Athens, Florence, Budapest and St. Petersburg); and second, the space has been slightly expanded. This is good because I found Skyline was very popular on the Dream and it was often impossible to get a seat. The menus in this bar light up when you open them! What an incredibly clever idea.

O’Gill’s Pub (which references Darby O’Gill) looks pretty much like any typical Irish bar, with dark wood and brass accents, and features some large TV screens so you can watch sports.

I really enjoyed the champagne lounge, Ooh La La. It is rather “girly,” with a French boudoir look. There is a lot of velvet, chaise lounges and ruffly chairs, and a bar with bubbles behind it. It’s very dark and very romantic.

The Tube is the new dance club, inspired by the London Underground (aka The Tube). The carpet features a Tube route map, booths along the outside walls are made to look a bit like Tube seats with subway-style poles through the tables, and a stage is set off by red English phone booths. 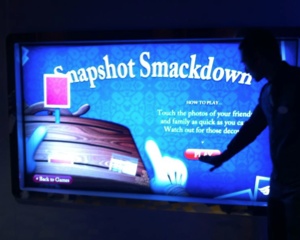 In the public corridor between Shutters and D Lounge is a huge interactive screen, featuring three really cool new interactive games you can play with photos taken of your family on the ship! I predict this will be super popular.

This brand-new show, exclusive to the Fantasy, promises to be a lot of fun. We were not shown the entire show, but did view a short “teaser” during the christening event.

Based on what I saw, it appears this show will be very similar to the excellent Aladdin show at Disney California Adventure park, which is one of my personal favorites.

Like the Disney California Adventure show, Disney’s Aladdin – A Musical Spectacular will include a fantastic magic flying carpet scene.

On the Disney Dream, the most elegant of the three dining rooms is called Royal Palace, inspired by classic Disney films like Cinderella, Snow White, Beauty and the Beast and Sleeping Beauty. For the Disney Fantasy, the decor was “tweaked” a bit, giving the room an overall lighter, sparklier look, and the dining room has been renamed Royal Court.

In addition to a change in color scheme, beautiful hand-crafted mosaic-tile murals of the princesses and their princes have been added to some walls, and pumpkin carriage lamps are now installed on some of the dividers. Otherwise the concept is very similar to the equivalent dining room on the Dream.

I have to admit, the whole concept of the Bibbidi Bobbidi Boutique, where little girls can do “makeovers” to become “princesses” has never really grabbed me, but then I don’t have a daughter, either. I’ve never even visited the boutiques at Walt Disney World. But after visiting the boutique on the Disney Fantasy, I completely understand the appeal. This place is seriously cute. It’s like a mini-salon with tiny gold chairs and adorable decor. I can see why it’s catnip to little girls! 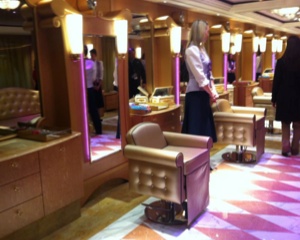 The Bibbidi Bobbidi Boutique on the ship features some exclusive makeovers, including an “Under the Sea” package in which the costume is a swimsuit with cover-up. On the night when the pirate party is held, pirates take over the salon and transform it into the Pirate’s League, where boys and girls can do pirate makeovers.

I was told reservations will be available online before the cruise, bookable like the current adult spa treatments, but as of early March, I do not see this option on my own Fantasy reservation. If you are interested in Bibbidi Bobbidi Boutique, I recommend booking as soon as you get on the ship, as I predict it will be very popular.

Bibbidi Bobbidi Boutique is available to guests 3-12 years old. There is a $10 no-show fee and a $10 fee if cancelled less than 24 hours in advance.