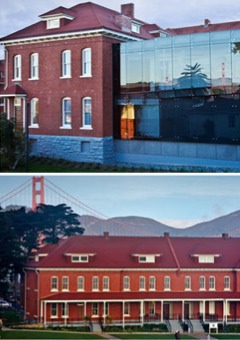 On a sunny day in June 2011, my husband (a major Disney parks fan), 2 sons (ages 10 and 13, also major Disney parks fans) and I went to The Walt Disney Family Museum in San Francisco. Located within the Presidio, the museum is in a simple brick building. I wasn’t entirely sure what to expect. Would this be like a children’s museum, heavy on buttons to push and craft activities? Or would it be like an exhibit you would find in a Disney park, with exuberant theming and fairly simplistic information?

To be blunt, I wasn’t sure if it would be interesting to anyone but a Disney completist.

Imagine my surprise when my husband found me about halfway through the Walt Disney Family Museum and told me that at least 2 hours had passed and we were now late for our dinner date with another family. Our 10-year-old was ready to go (although he had enjoyed the museum), but none of us had seen the 13-year-old since the second exhibit room. After some significant backtracking we found him proceeding slowly through the museum. Not only was he far from being bored, he was very disappointed to have to skip the second half of the museum as we rushed him out the door.

So what did we find inside that kept us so engrossed? The Disney Family Museum, appropriately enough, begins with family history: information about Walt’s parents & their families, lots of photos of a young Walt and his siblings, even some experiments of Walt’s with his first camera (a book leaps into his mom’s hands, a dropped bottle of milk reassembles). Following in Walt’s footsteps, you board an elevator designed to look like interior of a train car and upon arrival on the second floor you begin your journey through Disney’s career as he and his staff develop and perfect animated film technology. Film clips, sound clips, illustrations and a few interactive exhibits give a very complete sense of the problems that needed solving, as well as the innovation going on at Disney. And there are tons of artifacts and memorabilia throughout the museum that give a detailed glimpse of what was going on.

One of my favorite items was a letter from Salvador Dali thanking Walt for a visit to the film studio. Disney is such a successful mainstream company; it’s easy to forget they began on the cutting edge of a new art form. The museum even covers the 1941 cartoonists’ strike – surely not the company’s favorite moment, but part of their history nevertheless.

So, who would enjoy this museum? Clearly fans of Disney, but as a more casual fan of movies and art I found it fascinating as well. Each section of the museum is thoughtfully arranged and there is so much to read and see. What about kids? In my opinion, a younger child would find things to do and watch – most display areas had clips of films and there are a few hands-on activities, but be prepared to move through more quickly than you might like. This is a regular museum, NOT a children’s museum; the focus in on presenting detailed information to adults. If you really want to sink your teeth in and explore, leave younger children behind.

What about the San Francisco location? I wondered, presumably along with many Disney fans, why not put this museum near Disneyland or Walt Disney World? Wouldn’t that be more convenient to those already going to the parks? While a Los Angeles or Orlando location would certainly be more convenient, I think the San Francisco location ultimately works in the museum’s favor. The tone of the museum is somewhat serious and it takes a bit of extra effort to go – you can’t just hop on the Monorail as part of your day in one of the parks. As a result you don’t have huge crowds of people in theme park mode. The museum definitely wasn’t deserted, but people were there to learn and absorb, rather than expecting entertainment and thrills.

So whether you are an uber-Disney fan, or just enjoy film and technology, make some time to visit the Disney Family Museum. We’ll be going back to see the parts we missed!

We have found the following discounts for The Walt Disney Family Museum:

If you are visiting several attractions in San Francisco, check out these multi-attraction passes! These passes offer significant savings (up to 50%) on entry fees! Entry to The Walt Disney World Museum is included — with priority entry! The Go City San Francisco Pass gives you 27 attractions to choose from, including the Exploratorium, California Academy of Sciences and DeYoung Museum in Golden Gate Park, a Golden Gate Bay Cruise and lots more. Passes are available for 1, 2, 3 or 5 days, and you can visit as many attractions as you want. Explorer passes have options of visiting 3, 4 or 5 attractions.

In 2022, active military personnel received FREE admission for themselves plus 5 family members (6 people total) to The Walt Disney Family Museum from Armed Forces Day – Labor Day as part of the Blue Star Museums program. Some special or limited-time museum exhibits may not be included in this FREE admission program. For questions about particular exhibits or museums, please contact the museum directly.