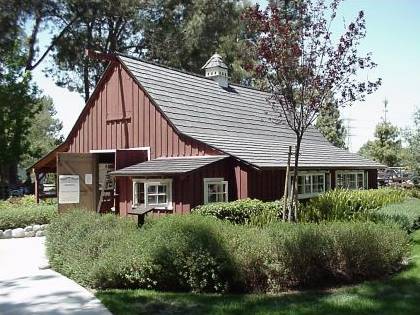 In 1950, Walt Disney built a 1/8 scale live steam railroad, the Carolwood Pacific Railroad, in the backyard of his house in Los Angeles. He named the railroad for Carolwood Drive, where his home was located in Holmby Hills. He also built a barn where he could control the switches on the track. The barn was a workshop where Walt and his friends could relax and putter. (Many of the early Disney animators were huge railroad fans and several operated their own backyard railroads.)

Arguably Walt’s Barn was the birthplace of Imagineering, because many of Walt’s railroad buddies became the first Imagineers. Many of them moved from animation to what later became Imagineering when Walt started planning Disneyland. One of the Imagineers’ early projects was the building of the Disneyland Railroad.

When the Holmby Hills home was sold, Walt’s daughter Diane Disney Miller worked with Michael and Sharon Broggie, founders of the Carolwood Society, to save the barn, which the new owners wanted to remove from the property. The barn was dismantled and stored until an agreement with the City of Los Angeles and the Los Angeles Live Steamers Museum made it possible to reassemble it in Griffith Park.

Since 1999 Walt’s Barn has been open to the public in Griffith Park. The barn is small, but has information about Disneyland history, railroads and Walt himself. It’s located in a pretty area with picnic tables nearby.

The Carolwood Foundation also saved early Disney animator Ollie Johnston’s backyard railway station, which has been restored and is on display next to Walt’s Barn. In 2010 the Foundation acquired Retlaw 1, the original combine car from the Disneyland Railroad, and is currently raising funds to create a permanent home for it.