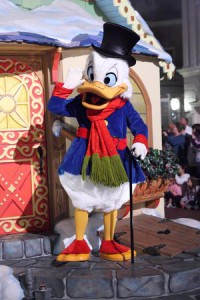 Disney World is beautiful during the Christmas season, with decorations everywhere and special holiday shows, holiday foods and holiday souvenirs you can only experience for a couple months out of the year. That said, if you don’t like crowds, it’s not the best idea to visit Walt Disney World during the week between Christmas and New Year’s Eve (December 25-31). It is undoubtedly the most busy and crowded time of the entire year. But perhaps for one reason or another it’s the only reasonable time you can go. We’ve been in that position ourselves, so we completely sympathize. We’re here to tell you: you can have a great trip at Christmas. It will be different from a trip in the off-season, and the crowds will be huge, but there are some nice compensations, like lots of shows and holiday parades, special fireworks displays, longer park hours and beautiful decorations. The key things that make a Christmas trip to Walt Disney World work are positive attitude and planning.

1. Mentally prepare yourself for big crowds and long lines. There is nothing you can do to change this, so just accept it. Stay positive! While there will be tired, grumpy people, there will also be incredibly cute children in princess outfits who have never seen a Christmas tree the size of a skyscraper or Mickey Mouse in his Christmas outfit, and that’s better than an hour of kitten videos to perk up your Christmas spirit.

2. Plan, plan, plan. Set priorities: what are your top 5 attractions in each park that you consider “must do” experiences? Once you know that, you really should have a touring plan, even if it’s just a list of rides scribbled on a napkin. You can use Disney’s Genie service to generate a FREE starter plan that should be a decent first cut. Better yet, buy a copy of The Unofficial Guide to Walt Disney World and use the plans printed in the back (you can tear them out and carry them with you). Then follow them! Make sure to take full advantage of Genie+ by getting your first reservation bright and early at 7 am, then grabbing a new Lightning Lane reservation every time you use the previous one. You also may want to consider spending extra money to get Individual Lightning Lane reservations for two ultra-popular rides each day.

3. Arrive at the parks early each day. Most people won’t get up early, so you’ll have shorter lines for the first hour or two. If you are staying on property, take advantage of the Early Theme Park Entry (and Extended Evening Theme Park Hours, if your resort qualifies). During Christmas week, the crowds will start to grow enormously around 10 am and by noon the crowds will be pretty epic, especially in the “pinch points” where the walkway gets narrower. The lines will start going down late in the day, but they will never be as low as they are in the first few hours after opening. During Christmas it’s common for the Magic Kingdom to have a regular opening time of 8 am, and Early Theme Park Entry at 7:30 am. If you can haul yourself out of bed and be in front of the Magic Kingdom at 7:15 am, the ride lines will be really, really short for quite some time. Yes, that means getting up at 6 am or so, throwing on clothes and heading out. Have a quick breakfast like yogurt or cereal, or have a bagel on the bus if you can. Remember, you can leave at noon, go back to your hotel and take a nap.

4. Magic Kingdom or Hollywood Studios might reach capacity at one or more points during the week. The park reservation system should make it practically impossible for any of the parks to reach capacity for initial guests coming to their first park of the day, but it’s entirely possible that park hopping to one or more parks could get shut down, and it’s even possible that the parks could close to guests coming late in the afternoon, even if they have a reservation. If you have a reservation for a specific park and are arriving before noon, you should be able to get in. But it’s not a good idea to make a plan for any of the peak days (Christmas Eve, Christmas or New Year’s Eve) that involves either hopping or arriving in the afternoon to Magic Kingdom or Hollywood Studios.

Animal Kingdom and Epcot have never reached capacity in their history, to the best of our knowledge, so starting your day in Magic Kingdom and hopping in the afternoon to Epcot, for example, should still work. If you do elect to stay in one park all day, bring any sweaters or jackets you may need later and stow them in a locker when you arrive (the lockers will also sell out, so if you need one, get there early), or bring a backpack that you know you can wear comfortably all day.

5. Don’t plan on going on massive numbers of rides, especially in the afternoons. Instead, make it your priority to enjoy the atmosphere. If there is a band playing, stop and listen. Wander around and look at the decorations. Enjoy some holiday treats. Wave at the characters. There will be some rides with relatively reasonable waits, even in the middle of the day, like the Mad Tea Party, Carousel, Railroad, PeopleMover, or the Swiss Family Treehouse. The animatronic and movie shows are a good place to relax and get off your feet: Mickey’s Philharmagic, Country Bears, the Hall of the Presidents, and the Carousel of Progress, or at Epcot and Hollywood Studios you can check out the various movies and shows in the World Showcase at Epcot or Muppet-Vision 3D. It’s pretty rare for these shows to have a wait time longer than one complete show length, and most of them have an air conditioned (or at least covered) waiting area.

6. Make dining reservations as soon as possible. You can make them up to 60 days in advance, and you need to book them that early if you want the hard-to-get reservations like Be Our Guest, ‘Ohana, Cinderella’s Royal Table or Le Cellier. If you don’t need to get a specific popular restaurant you’ll be fine booking somewhat later, but don’t delay too long and definitely make some reservations if you want to have sit-down meals. If you don’t have any dining reservations when you arrive, you will have many fewer options for table-service dining. Most of the available reservations will be for very early or late, or at second-tier restaurants in resorts, or both. Epcot has many more restaurants, so there will likely be a few better options there. If you’re stuck, you can try our favorite “hidden gem” restaurants – reliable places to get a good sit-down meal that are not typically booked solid: Ale & Compass Restaurant (at the Yacht Club Resort), Olivia’s (at Old Key West), and the Turf Club (at Saratoga Springs). For other ideas and more detailed recommendations, we highly recommend the Disney Food Blog e-books, especially their Holiday Guide.

7. Plan to pre-order your quick-service meals using the mobile order system, and be prepared to order early. If you want to eat lunch at noon, order at 10 or even earlier. If you wait until you get hungry to start ordering food, your return time could be 2 hours or more later. Also consider bringing some snacks, like granola bars, string cheese and juice boxes, with you to stave off starvation, or budget for plenty of churros and ice cream (which will also have lines, but not as long as the ones for the restaurants).

8. If you have young children, rent a stroller in advance. In crowded conditions it is very hard to keep track of kids on foot, and it’s also exhausting for little kids to fight their way through masses of people. A stroller is completely worth it, even for kids who would normally be a little old for one. We recommend Magic Strollers, which will save you a ton of money compared with renting from Disney. It also saves you time: you can roll right into the park and get into line for a ride, instead of waiting in the line to rent a Disney stroller.

9. Work all the angles for the popular shows. If you want to see the first Fantasmic! show of the night (or if there’s only one that night) at Disney’s Hollywood Studios, buy the Fantasmic! Dinner Package. Otherwise you are facing a very, very long wait in line for the show, or you may not get in at all; we recommend getting in line two hours early during peak periods for the first show. If there are two shows and you can wait for the second, it gets better (an hour early is probably OK), and if there is a third show, you can probably show up 30 minutes early for that one and still get a seat. Likewise, if you want to see the Candlelight Processional at Epcot, buy the Candlelight Processional Dining Package or you probably won’t get in.

10. Schedule some “down time” during your vacation. It is extremely stressful to spend the whole day fighting crowds. For every three days you spend in the parks, consider taking one whole day off to explore the cheap and free things to do at Disney World.

All this may seem daunting, but don’t be discouraged! We avoided Walt Disney World at Christmas for years, but eventually there was no way around the kids’ school schedules and we had to go during the absolute peak time. We went with a big family group and had a blast. We’re old hands at Disney, which made things smoother. But we personally know multiple families who aren’t Disney experts and decided to go at Christmas; they followed our tips and had a great time. Just mentally preparing yourself for crowds is a huge help, and any amount of planning is better than no planning at all. Good luck and enjoy your trip!