California Grill is one of those Walt Disney World restaurants where we try to dine at least every other year. (Considering that one of the restaurants we checked out on this trip was last visited sometime during Clinton’s presidency, that’s either high praise, or laziness, take your pick.)

Not much has changed. You still have to check in on the fourth floor, get a pager and then take the elevator to the restaurant where you’ll wait till the little plastic box goes bzzzz. The restaurant’s active promotion of using the outside area for watching the fireworks has vastly diminished the noise level and crowds of people pushing past your table to get prime spots next to the window. The bar area seems redesigned, or at least different somehow. I remember past visits when it seemed a lot busier and noisier. Or maybe it’s just me, getting older and yelling at all the kids to get off my lawn.

So we move onto the food. Well, we will move onto the food, but first, cocktails. In our case, it had been a long day of travel, but really, whom am I kidding – I don’t need a reason for a cocktail. Unfortunately, this seemed to put our waiter off his game. Apparently, starting with a nice relaxing cocktail while you peruse the menu is not accordingly to the Plan. The Plan, as far as we could see, seemed to consist of 1) sit; 2) look at menu; 3) order; 4) eat; 5) leave and make way for the next group. Since ordering cocktails and consuming cocktails don’t have a number, they do not fit into the Plan. After we convinced the waiter that we did indeed intend to have a cocktail, and then order our food later, and phooey on the Plan, we reached an accommodation.

And it was worthwhile to stand our ground here, as the cocktails were excellent. Mary particularly enjoyed her Twisted Mai Tai, which was made with fresh juices.

We started with sushi, which was very, very good, perhaps even superlative. It definitely, exceeded expectations in a superior manner. We had the super deluxe platter, which easily served as a starter for two, and that’s how we attacked it. Besides, you get to say “SUPER DELUXE PLATTER!” and high five, or you would if your wife would get into the spirit of things.

I ordered the lamb chops, and I wish I could tell you why. When we’re at home in Colorado, restaurants seem to serve nothing but meat, meat, with a side of meat. So when we travel, we tend to get the seafood, if we happen to be in a place where you can get good seafood. Or decent seafood. Or even just so-so seafood. So if we’re within fifty or a hundred miles of the coast – it’s all piscine goodness, all the time.

I was fairly happy with the chops, though I suspect that if I had to choose again, I might just have more sushi, or maybe the black grouper. The chops came with olive oil smashed potatoes and roasted baby artichokes, both of which were fine. The waiter suggested a pairing with a glass of Pinot Noir that I was pretty ecstatic with, so there was that. Still the fish, the fish…. it calls to me. Perhaps it was also that I didn’t want to follow the sushi with more fish as an entrée. I like to zig when everybody is expecting me to zag.

Mary on the other hand had a dish that we ultimately entitled the Cthulhu Special, Rise of the Old Ones, and if you don’t understand a reference to H. P. Lovecraft you really need to do some catching up on classic old-timey mind-bending horror. It was a soft shell crab that had been breaded with blue cornmeal and then fried. It was purple. Now, while I don’t have anything against purple food, I have to draw the line at something purple and tentacly. Yes, I realize that soft shell crabs, at least the ones I’m familiar with, don’t have tentacles. But the way Mary’s was presented, it looked like there were a multitude of long wavy appendages. As a matter of fact, it looked an awful lot like this – only purply. 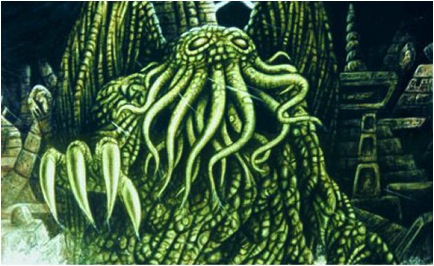 To top it off — or I should say underneath — the brain sucking horror was what looked suspiciously like a pool of purple goo. Which turned out to be a very purplish polenta (also blue corn), cooked with chili peppers, that actually tasted considerably better than it looked. The crab, on the other hand, it was not good. I’m not sure how this particular dish made it onto the menu. Since soft shell crab isn’t always available, it’s reasonable to assume that it’s a seasonal dish, but still… why?

When the waiter came to inquire about the meal, he noticed that Mary had not been able to consume more than a couple of bites. He asked how she liked her food and she made that “so-so” gesture with her right hand. The plate was quickly whisked away, without question, and some additional sushi was ordered in its place. Mary liked the sushi a lot more, even though some of it too was made from horrible sea creatures with tentacles. There’s just no consistency with this woman.

We found after cocktails, sushi, entrees — both completed and sent back — more sushi and a glass or two of wine each, we were done. But we also knew, somewhere during the night, we’d get the munchies. So we asked for, and received, the cookie platter dessert to go. The cookies ranged from fair to quite good.

Overall, I’d grade this meal, on a curve, as a B-. Cocktails and the wine list are excellent. The crusty sourdough bread and butter sprinkled with sea salt was superb, and I could have easily made a meal of a basket of that bread and a salad. Or just the bread and butter, but Mary would be giving me the gimlet eye if I tried that, so salad then.

The sushi was really quite good, verging on exceptional, though I would skip the Dragon Roll in the future (this was the replacement dish for the Cthulhu crab). As Mary put it, there was too much “stuff” on it – sauce, things wrapped in other things. Still tasty, but not as good as the straightforward, plain sushi items.

Obviously the entrees were very hit and miss. Mary’s original choice was pretty much a disaster, and it’s hard to believe that anyone in the kitchen thought this was a good idea. Still they replaced it quickly, and only minimal harm was done. My lamb was very good, and if you’re a carnivore in good standing, you shouldn’t be unhappy with it. Still, there’s quite a bit of room for improvement, especially at these prices.